How To Protect Your Plants From Frost 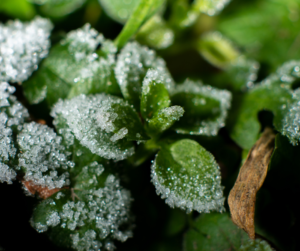 When the water vapor in the air turns to solid, frost is formed. This is a thin layer of ice that will coat everything and happens when the temperatures start to fall.  There are different intensities of frost on plants which is called light or hard frost.  These intensities present different issues. Most plants can survive a light frost without issues, but when the hard frost comes, that is the end of that plant’s cycle for the winter. Let’s take a look at ways to protect your plants from hard frost.

If you have potted plants, it is important that you bring them indoors for the winter.  Many of us enjoy having potted plants on our porches or decks.  However, nearing the summer end, you will need to find homes for the plants indoors that have access to sunlight through a window.  This goes for any hanging baskets that you plan to keep to display the following year.

2-Watering plants during the day

While this may not make logical sense, if you water your plants during the midday, when the temperatures are higher, it can protect them from frost.  This is because moist soil is warmer than dry.

Adding a thick layer of mulch is like putting on a sweater for your plants.  This can help the plants keep warm.  A thick layer of leaves or straw will also do the trick.  This must be a pretty thick layer such as 3″-6″ to ensure that the plant is fully protected.

Covering up the plants that you are trying to protect is similar to the mulch option. It is covering them like you are giving them a coat.  This allows them to remain warmer and will fend off frost issues.  They actually sell what they call Cloche, which is a bell-shaped cover that is made from plastic.  However, a cut-off milk jug would do or a bucket.  Anything to keep the plants from being exposed to harsh temperatures.

You could also cover them with a blanket or bed sheet.  This tactic is used quite often when springtime temperatures drop and the garden was already planted.  This will keep the entire garden warmer.  For extra resistance to the cold temperatures, you can add a layer of plastic that will add a layer of protection. This can be a sheet of plastic such as a drop cloth or shower curtain.

Space blankets, which are blankets that have a reflective side to them will also add an extra layer.

For all our landscaping services go to Fallaslandscape.com